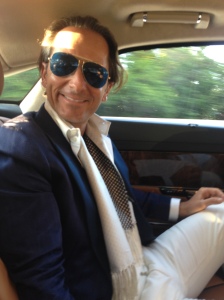 Bravo TV fans know him as Adriana’s fiancée on the Real Housewives of Miami, but off-screen Frederic Marq is one of the top high-end hotel designers in the world. With multiple projects happening in hotel development, and an aquatic love nest (his childhood dream) being built, it’s amazing he had the time to talk to us, but we are so glad he did. Here’s what he had to say about his exciting career, that tense RHOM reunion, and Adriana’s softer side!

TBB: Hello Frederic, happy new year. Before we talk about your business I have to talk about RHOM. What was your reaction when, after a long delay, Bravo finally decided to renew the show?

FM: We were very happy! We were glad it happened because truly, in season 1, the amazing essence of Miami was not shown, and that was a big mistake! They weren’t showing the nightlife, the restaurants, the beautiful beaches, the amazing seascape. (The show) is a lot of work, but even so, we’re happy to be given the chance.

TBB:Your fiancée (congratulations!) Adriana (De Moura) got into very heated arguments with Joanna (Krupa) and Karent (Sierra) at the reunion. Did you watch it? What was going through your mind?
FM: I watched it and I was actually at the reunion (taping). I think my reaction was not one of surprise. It was a continuation of what happened during the show. There was a feud and it kept on going. I knew it was coming.  If it did not happen we would be on the wrong show.  It is the nature of the Real Housewives franchise. It was good at the end to see Adriana becoming the bigger person and apologizing to the girls.

TBB: We’ve interviewed many Housewives on TBB, but not many of the House Husbands.  Give us your perspective on being a Real Housewives guy.

FM: It’s truly a lot of fun and I think anybody from the shows would tell you that. Yes, people do get critical, but we get to do a lot of things other people don’t, regardless of the drama.

TBB: Bravo fans may know you from the show, but the luxury world knows you from your businesses. What have been your favorite projects?

FM: On the design side my favorite project was the US Grant in San Diego. The owners took a gamble and let us design the way we wanted to. I won the award for the best luxury hotel room  design in the world against 3000 other luxury hotels. I love what I’m doing in Miami right now. We just opened up The Grand Beach Hotel, 435 rooms in Miami Beach and are now working on the second one which will be called The Grand Beach Surfside in Bal Harbour. It’s really exciting to work for a creative owner.  I also enjoyed very much designing Selima Optique’s flagship store in Soho, a bohemian chic New York landmark.

TBB: You are a big supporter of the Fine Arts in Miami, where the annual Art Basel just took place. Were you involved in planning that?

FM: No I don’t help plan Art Basel, absolutely not, but I enjoy it tremendously.  Miami is becoming such an amazing city. It gets bigger and bigger every year. So many talented artists. The entire world is visiting Miami.  So I don’t plan Art Basel, but I do enjoy  the art and going to all the events.
TBB: One of the greatest things about going a vacation, at least in my opinion,is that feeling of luxury in a fine hotel. Can you give us some tips on how to create that same luxurious look at home?

FM: At home look at design magazines see what you like and take little pieces of what you want and put that together in your home. Pick a style, buy a book of that style, and put it together in your house, it’s really not so difficult. Everything has been done already, use the past , your experiences, your travels to inspire your current design.

TBB: Speaking of home I read you are currently renovating a yacht for you and Adriana to live in. Is this true?

FM: It is absolutely true and you have to be completely crazy to do this! I purchased a yacht that was one of Howard Hughes’s favorites. It was built in 1929. I’m  redoing the boat from A-Z and updating it with all the modern comforts. It will be  like a Great Gatsby on water. It’s not an easy task but I just have to do it. It was always a dream of mine to design a yacht. My dad said it’s amazing because all your adult life you are trying to realize the dreams of your childhood.
TBB: How does Adriana feel about you taking on such a project?

FM: This is one side of Adriana that many people don’t know. She has an amazing sense of adventure.  Her father would tour the Amazon trying to find gold mines. Adriana took that side of him. How many would women would say “Great let’s do it!” when being asked to renovate and live on a yacht.

TBB: How long will the boat take to complete?

FM: I’m taking my time. There are people working on it everyday. By going slower you don’t have to do things twice. Maybe in 8 months to year?

TBB: Can you share any of the wedding details?

FM: We have not made any plans, but definitely in the spring. It would be nice if the boat was ready for it, but I don’t see that happening.

TBB: Thank you so much for talking to me today. Is there anything else you would like people to know?

FM: There’s another side of Adriana that was shown when she was playing the piano duet with her son (Alex). I’m glad they showed that this season. She is an amazing mother. Sometimes the press will try to criticize, but every single night she studies two or three hours with Alex. She is working very hard for him to make it, we both are. It’s truly our dedication, love, and effort that she does the best for his future life. That’s one side that the readers and the world should know. A show like the Real Housewives focuses on a fantasy lifestyle filled with drama, but people like that portrayal of the characters. I want to emphasize, more than anything else that, Adriana is a loving, fun dedicated amazing mother.

*Editor’s note: This interview was conducted before the recent rumors surrounding Adriana and Frederic’s relationship as “already being married”. While we have no way of knowing, as of now, the truth of these stories, rest assured we are working to find out. Interviewing Frederic was a pleasant experience. We are sure whatever the truth is there is a logical explanation – TBB