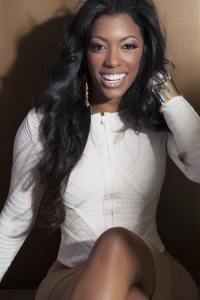 As the youngest Housewife across all of the franchises, Real Housewives of Atlanta’s Porsha Stewart had lots to prove. Holding her own with the strong 30 and 40 somethings of the cast was tough enough, but proving herself to the viewers was a whole different ballgame. In her first season on the show she has weathered some cat fights with Kenya Moore, a personal look at her struggle to carry a child, and some crafty edits (265 days of yams anyone?) but she’s taken it all in stride. Below she opens up about being the newbie, her ability to laugh at herself, and some very mature decisions she has made.

TBB: Hello Porsha. It’s been a very successful season of RHOA. Ratings are through the roof. What role do you think recent cast changes have played in the success?

PS: I feel like we just bring a different vibe, a fresh perspective, a brand new energy and a brand new storyline. We really know how to shake up things!

TBB: This season you are the new kid on the block, significantly younger than your cast mates and all of the ladies across the Housewife franchises. How did the opportunity to be on the show arise?

PS: Atlanta’s social scene is very small. I had a charity event and I invited one of the ladies. The producers met me and they asked me to join the cast. My family was familiar with the women and knew they were a great group. I ended up meeting all of them and the rest was history.

TBB: Being younger than the other women, have any of them assumed a mentor or motherly like role for you like Lea (Black) did for Lisa (Hochstein) on RHOM?

PS: Nene (Leakes) and I have really hit it off on a personal level. We often talk and she tells me how much my story is similar to hers. Like me, she was a housewife and her husband was the bread-winner until she stepped out to start a career of her own. She’s been really supportive of me.

TBB: Did your age give pause to either you or the producers when casting?

PS: I think that the producers, in the beginning, questioned whether I would be strong enough and be able to dominate around such strong and opinionated women. But I proved that I can hold my own. I have a child, I’m a married adult. I have an opinion and I’m not afraid to voice it.

TBB: The child is your stepson, Syre. Why don’t we see that side of you and (your husband) Kordell on the show?

PS: We decided not to feature Syre on the show. As adults we made the decision to join (RHOA) but he’s a child and can’t say for himself what is best for him. We just want to let him enjoy his childhood.

TBB: You and Kordell want more children. Your major storyline has been a struggle to conceive and carry a pregnancy due to fibroids. As a woman who went through infertility, I know this is a very sensitive subject. How has the fan reaction been regarding your struggle?

PS: It’s been so heartwarming to hear the responses of women. I’ve had women email me, one even called me through my hairstylist. She had a miscarriage that day the episode aired. She wanted to thank me for being brave enough to share my story because it helped her in her struggle. It’s heartwarming to know that I’m able to encourage other women to keep moving forward.

TBB: Recently you posted a couple of pictures on Instagram that got tongues wagging you may be currently pregnant. It’s not really something I am comfortable asking, but is there anything you were trying to tell the public or did everybody read too much into it?

PS: (laughs) A picture does speak a thousand words…and for me, what I can tell my supporters is just keep watching!

TBB: You have been very clear in your On The Fly interviews that you are not very fond of Kenya Moore. What’s your overall opinion on each of the Atlanta ladies?

PS: Overall I would say I’ve enjoyed most of the ladies and some of the relationships I’ve been able to build are genuine.

TBB: Would you like to come back for a second season with RHOA?

PS: I definitely would like to come back for a second season. There’s another side to me I’d love to be able to show. There’s a lot I have to offer and a lot of encouraging things I will be able to share that would be an example to other people. Kordell and I are a great example of a young couple that’s actually in love.

TBB: You’ve had some memorable faux pas like the 265 days a year comment and all the talk of yams and twins. Do you feel editing has been on your side this season?

PS: When they edit they edit so that it can be entertaining. So if you say something and slip up they’re going to keep it because it’s entertaining. It’s alright, I have the ability to laugh at myself.

TBB: You are the only Atlanta Housewife without a paying job. What are your plans for the future? Will you use the platform of the show to launch a business?

PS: I don’t have a paying job but I have a life of giving back. I’m involved with charities that are a great value to the people I help. There are a few things that I’ll be rolling out next year based on what people have asked me advice on. I’m working on a home decor line.

TBB: Thank you for talking with me. Is there anything else you’d like people to know about you?

PS: I think that’s about it. That was pretty good!

Follow Porsha on Twitter @PorshaDStewart
What do you think of the RHOA cast changes?
Watch Porsha on The Real Housewives of Atlanta Sundays on Bravo (Check local listings)

8 thoughts on “Porsha Stewart – A Housewife for a New Generation”