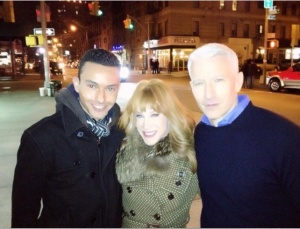 I met John Raphael Oliveira through Twitter and we instantly clicked. He’s an East Coaster who moved out to LA to live his dream. As an associate producer on one of Bravo’s only talk shows, he meets extraordinary people and gets to do some equally extraordinary things. Not only can he shed light on what goes on behind the scenes of the Kathy Show, but his own story is equally interesting. JR, as I affectionately call him, is young, bright, and has a quirky sense of humor…all things prerequisite to be Kathy Griffin’s right hand man!

TBB: What is your title and role in the planning and execution of an episode of the Kathy Griffin Show?

JRO: I can’t say how much this is a dream job for me. My official title is talent associate producer. After a celebrity guest is booked, my co-producer and myself deal with both the logistics and creative planning regarding the guest. We’re in charge of doing research on the guests, pre-interviewing them and going over the show, being their on-site contacts on show days, etc. It’s been amazing meeting people I look up to! In addition, I find the celebrity pictures for “Explain This” and present them to Kathy. The most fun is when Kathy decides to use us in her on-camera field pieces. You never know what’s going to happen.

TBB: How did you land your exciting job?

JRO: After spending two years at Judge Judy, I was promoted to segment producer and knew I had gotten as far and as high up as I wanted on that show. It was a great experience and an honor working for such a legendary woman, but I was ready for something new that would excite me creatively. I prayed for something new to materialize and it did! I heard that Kathy Griffin would be shooting her new talk show on the same studio lot where we shot Judge Judy so I saw it as my chance to make things happen. I dropped off letters, called people, etc. and then got an interview! The rest is history! I had been a HUGE fan of Kathy since before college. I remember seeing her live in Boston years ago and sitting in the back row and just dreaming about working with her and being a part of her staff. At that point, the D-List was just starting and Tiffany (Rinehart) and Tom (Vise) looked like they were always having fun and I think everyone dreams of having a job where you’re laughing 90% of the time. I’m still pinching myself that my dreams came true and it’s better than I could have ever predicted.

TBB: What is the greatest challenge you face at work?

JRO: In general, I’m a control freak and when things start to unravel I get a little crazy. Working on a live show is fun because you never know what’s going to happen and you only get one shot! It’s kind of like theater! But at the same time, not knowing what’s going to happen out there can be a little daunting! You prepare all you can and hope for the best! Who knew Chris Noth was going to tell our audience to do LSD when he was on with Chelsea Handler? Certainly not us!

TBB: What is a typical work day like for you and the staff at Kathy?

JRO: In a word…fun. Every day is for the most part a little different. I suppose on a typical day, we all come in and start talking about what we watched on tv or anything we came across that was funny. This is our unofficial way of starting to plan the show. The writers all get together and start planning ideas and my co-producer and myself start getting the celebrity logistics in order. When Kathy comes in, we have a huge pow-wow with her and get the ball rolling! We’re high on laughs and low on drama.

TBB: Who has been the most interesting person you have met while working at the show?

JRO: Besides Kathy Griffin herself, the most interesting person I have met in the last year is the living legend…CHER! Back in November, Kathy was invited to participate in a PSA with Cher and she brought me along to the shoot. Just being in Cher’s presence is intoxicating. She’s such a lovely, down to earth person. She just has “it” and it’s no wonder she’s been a presence in this industry for as long as she has!Later on that day, completely by chance, I ran into another living legend who lights up my world…Britney Spears! I didn’t speak to Britney because I was way too busy freaking out. I was unprepared for that sighting!

To sum up, November 1st 2012 was a day that will live in infamy in my own personal history. The gay trifecta of Kathy Griffin, Cher, and Britney Spears was achieved!

Meeting celebrities is both awesome and nerve-wracking.

TBB: Have you any funny behind the scenes stories you can share?

JRO: There are so many funny stories, from traveling with Kathy to working on the show, that have occurred this past year. These moments include everything from Kathy sticking her tongue down my throat unexpectedly on camera, to Jimmy Kimmel asking me to bite his earlobe, to running around between commercial breaks trying to refill the guests’ drinks on a recent episode after Steven Weber spilled his wine all over poor Kate Walsh!

I’m not exaggerating when I say that 99% of time spent with Kathy is funny whether it’s during a wardrobe fitting with her or sitting at the airport lounge waiting to board a flight. There’s always some moment of hilarity.

JRO: Kathy jokes that she wants her staffers to live in fear of her as they would if they worked for Madonna or Naomi Campbell. However, that’s far from the reality. She’s a great boss. She knows how to make things funny and she knows the direction she wants her show to take. You learn a lot from her because she’s been in the business for such a long time. I’ve learned to trust her instincts.

TBB: What do you do when the show is off season?

JRO: It’s strange for talk shows to have off-seasons but it is what it is. I was extremely lucky after season 1 ended. Kathy scooped me up and I got to work with her at her house every day. Call me anything from her intern or her second assistant. I was actually working with her longer than I was with season 1. It was so much fun and I was with her when she taped two stand-up specials in Long Beach and Minneapolis, traveled to Vegas to help out at IHeartRadio music festival, etc.

TBB: What is your advice for someone who wants a job in your industry?

JRO: For this, or any industry, my advice is to work hard and follow your dreams. You have to really want to be successful and you have to be willing to sacrifice and work hard. It WILL pay off. Also, be kind. You never know who’s going to help you out or be your boss and a nice attitude goes a long way. Also…schmooze security…they’ll get you backstage!

JRO: I’d just like to say thank you to you for being you! You are a wonderful blogger, mother, tweeter, etc. Thanks for your support of KATHY and of myself! Don’t forget to watch KATHY Thursdays at 11:30PM on Bravo! We’ve got some fun stuff coming up including a spoof on one of television’s longest running dramas so stay tuned.

I encourage anyone to tweet me (@JohnRaphael). I respond to everyone! As you know, I can get very snarky when discussing my beloved Housewives! I’d love to collaborate with you more and discuss other shows (Housewives!!!).

Video:John on Kathy with Jimmy Kimmel!