On October 24th I appeared on national television on the Meredith Vieira show! It was an amazing experience and I learned some valuable healthy eating lessons! In the coming days I’ll share the whole story including meeting Meredith and The Biggest Loser’s Dolvett Quince as well as what goes into making a segment like the one I was on. Until then here is the clip in case you missed it. Sorry for the poor sound quality, I bootlegged while my little ones were asleep..it was either that or hearing them play in the background! 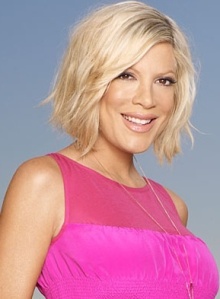 It’s been quite the busy week in the land of reality tv. But then again, when isn’t it?

First off, let me welcome Bethenny Frankel back to The Real Housewives of New York City. Opinions seem to be mixed about the Skinnygirl‘s return but I for one, am thrilled. Bethenny belongs on reality tv and always brought fun and a little drama to the scene. I can’t wait to see her interaction with the other ladies.

Speaking of The Real Housewives, Us Magazine is reporting that this will be the “most intense” season of the Real Housewives of Beverly Hills yet. According to Kyle Richards and Yolanda Foster, it’s a complicated season that features newbies Lisa Rinna and Eileen Davidson. On a side note, how ironic is it that two soap opera stars are joining a soap opera? Anyway, the ladies dish that there is all sorts of drama to go around in the fifth season, including many disagreements and some new friendships. Additionally, several outlets including Radar Online are reporting that Lisa Rinna’s husband Harry Hamlin refuses to appear on the show. His agents allegedly told him it may be bad for his acting career if he participates. Sources say it’s quickly becoming a storyline as one cast member relentlessly questions Lisa about Harry’s absence. We shall see. Season five of my favorite housewives franchise premieres soon on Bravo TV.

True Tori premiered this week and as expected it was another crying and whining fest. I cannot for the life of me figure out why anyone would do a reality show of this sort. Well obviously for the money but it seems like blood money to me. While I do think Dean McDermott is definitely a cheater, I did a little investigating the other night and I cannot find a photo of this woman he cheated with anywhere. Is it fake? The world may never know. Tori Spelling meanwhile who’s in the hospital with respiratory issues, yet again tweeted out a cryptic message the other day, claiming she now knows there’s one person who will never be there for her. Is it Dean? Is it Mama Candy? Again, the world may never know, and probably doesn’t care anyway!

Hasta la vista Honey Boo Boo. TLC has cancelled this ridiculous show after four seasons. Why you ask? Well, Mama June is currently dating a convicted child molester who People magazine reveals is an old boyfriend. Mark McDaniel served ten years in a Georgia prison for aggravated child molestation. Get this, Anna Cardwell, June’s 20-year-old daughter, was the eight year old victim of McDaniel. Anna is reportedly beyond hurt by her mothers actions and says their relationship may be over. Honestly, why these people were ever on tv is a mystery to me. I found this show only mildly entertaining and I’ll watch pretty much anything. Watching those fools and their disgusting behavior does not, a tv show make. Na Na Na Na Na Na Na, hey hey hey, goooooodbye.
Tonight on Bravo, Real Housewives of New Jersey secrets revealed part one airs at 8 EST. Why not the reunion? That’s annoying. It’s followed by a couple of episodes of Manzo’d With Children and Watch What Happens Live with Dina Manzo and Mark Consuelos at 11:30.
Watch this space for my latest reality adventure as I meet up with Andy Cohen yet again at his next book signing in November.  Stay tuned…

Bethenny recognized me at a book signing in August of 2013.

“After many years of hesitation, I have decided to return to my roots on The Real Housewives of New York City. I have been through a long and arduous road since my departure, and I’m finally coming out on the other side. It finally feels right to go home again.” – Bethenny Frankel

The above is an excerpt from Bethenny’s October 20th blog post. On her website the original  Skinnygirl confirmed long suspected rumors of a return to the reality series that made her a household name. The announcement crashed her website and it seems that Bethenny and Bravo fans alike are rejoicing. According to Hollywoodlife.com  Bethenny will be joining a season 7 cast that features LuAnn De Lesseps (full time  once again), Heather Thomson, Kristen Taekman, and Sonja Morgan.

After a season 6 that suffered a serious ratings drop, it appears Bravo feels Bethenny is RHONY‘s Hail Mary. What I wonder is, is Bravo Bethenny’s HM as well? After her talk show tanked, the self-proclaimed queen of TMI went into a bit of hiding. Aside from an Instagram photo that caused a bit of stir, we really didn’t hear much from her. Now with a new children’s book, Cookie Meets Peanut, on the market, she has started making the rounds again, appearing on shows like Access Hollywood and at book stores to re-connect with her fans  and sign copies of her first foray into kiddie fiction. The fact that it is all timed with this announcement can make one wonder if she needed the air time as a Real Housewife as much as the Real Housewives need her.

It has long been argued that, despite having your dirty laundry aired to the masses and  falling prey to a producer’s ability to edit you any way they wish, being a Real Housewife is worth the cons. It’s been viewed as the ultimate launch to something greater, but lately the track record of that is even less promising than a match made on ABC‘s The Bachelor. The Housewives empire has yet to see a fledgling fly far from the nest. Bethenny made it the furthest. Even though Nene Leakes has supposedly amassed a significant amount of notoriety, she never truly left the show.

Every single one of Andy Cohen‘s chosen women that fled the flock, has either vanished from the vernacular, or come crawling back to, as Bethenny calls it, her “roots”. The trend started with Dina Manzo who was followed by her sister-in-law Jacqueline Laurita. Both women, following their departures, one by choice and one by force, suffered a significant failure to launch once Bravo clipped her wings.

Observe twitter and you will see several of the ghosts of Housewives past treading water, still trying to make it by toting any product and taking bits on any reality show…(Couples Therapy anybody?)…just to stay relevant. The fact that Bethenny, the one who seemed to really find her own way and success sans Bravo TV, is back is a really strong statement.

What is it about being a reality star that makes it so hard to stay and yet so hard to stay away? Is it the fact that these people aren’t so much famous, but more infamous? Is it that they love the camera and the glamour of being on television, yet don’t really have the unique set of skills required to be actors? Or are these people an extremely self-obsessed narcissistic microcosm of society? I am not accusing anybody here, I am just simply trying to understand, and to get the thoughts of you, the fans of these shows. Why do these people need this forum to thrive?

As far as Bethenny’s  return, I think as a viewer it will be great. She is entertaining and I will always be a fan. The larger picture however, the subliminal message about life on and after reality tv…well that’s another story.

Tell us are you excited for Bethenny Frankel’s return to RHONY? Are there any other Housewives you’d like to see “resurrected’?