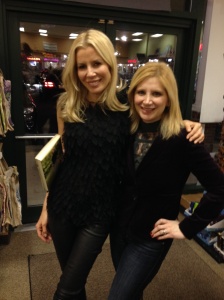 Tara Cushing– Founder/Editor in Chief– Tara Cushing cut her reporting teeth in college as a communications major with a focus on broadcast journalism. She interned at CBS Sunday Morning News in the mid 90’s. Post college she pursued a different career path, but her love of writing, television news, and pop culture never wavered. After some life changing experiences, including the birth of twin boys, Tara decided it was time to answer her calling. She created the very successful @TheBravoBitch Twitter account and used it as a path to gain access into the exciting world of Reality TV News. Tara continues to tweet for TBBReality from her new account @TheBravoBlonde . Of all the hats she wears her proudest is being the CEO of her family which includes her sons, loving husband, and a smelly but loyal basset hound named Houston.

Lesley is a wife and mommy who grew up and lives in Miami, FL. She is no stranger to media as her father was a famous local radio broadcaster, who she worked for reporting business news and voice overs for several years. Married to Darren, Lesley is a mom of two boys,  one girl, and two silly goldendoodles Isabella and Roxi. When she’s not busy chauffeuring them all around town she, has Riris Hair Ties– making hair ties for little girls and moms. Lesley also dabbles in graphic design and DVD montages for parties.  Everyone in Lesley’s family watches one reality show or another from Real Housewives to The Amazing Race and Wife Swap to LA Ink.  Lesley loves Bravo TV and in particular Andy Cohen, she is so excited to be part of TBBreality!