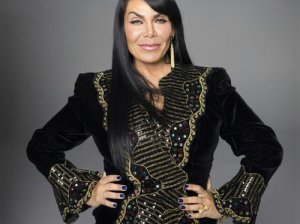 Mobwives star Renee Graziano has been through enough to dub herself a “Drama Empress.” Having dealt with hurdles such as a cheating ex-husband who “ratted” out her father, a plastic surgery nightmare that resulted in a life threatening infection, and a prescription drug addiction, Graziano has been engulfed by her share of flames. Like a phenix, however, Renee rises from those ashes over and over again. With a new season of a hit show, a renewed relationship with her once estranged father, and a new lease on life, she proves that she truly is stronger than ever.
TBB: Congratulations on your third season of Mobwives. When your sister Jennifer (Graziano) came up with the idea for the show did you expect it to become such a big sensation? What was your role in the show’s development?
RG: This was solely my sister’s idea. She’s the creator and executive producer. That being said, I absolutely knew it was going to be a hit! I was begging her to be on from the beginning. She kept me out in the cold until the very end. She said she was getting back at me for how I treated her when we were kids (laughs). However, she knew from the beginning that she wanted me to be a part of it.
TBB: How did VH1 end up being Mobwives’ host network?
RG: VH1 had turned us down the first time. But (Mobwives) was a concept like no other. We are talking about a lifestyle that really isn’t allowed to be spoken about.
TBB: Your father, famed mobster Anthony Graziano, no longer speaks to you or your sister because of the show. How hard was the decision for you and Jennifer to move ahead with Mobwives despite his feelings?
RG: We had to make our own decision, even if it was hard. This was my life, not my father’s, and we knew that eventually he would come around. Now I speak to my father on a regular basis. Ever since season 2 when I got sick from my surgery, my father and I have been talking. There’s nothing more important than my health and (we) put everything else aside.
TBB: Speaking of your health, you took to Twitter last summer to blast the doctor that performed the surgery that left you sick for months. Can you talk about what happened and have your complications been corrected?
RG: I was very vocal about it. I’m in litigation right now so I can’t say too much. What I can tell you is that the surgery did not turn out well. I lost a lot of blood and developed MRSA. I had a PICC line for 10 weeks. I ended up in the hospital and was allergic to Methicillin, the strongest antibiotic used to treat MRSA so the doctors had to come up with a special cocktail to help control my case. I had an open wound on my back for four months. It was so scary and painful. The infection was the size of a lemon. I had reconstructive surgery in June. Dr. Michael Fiorillo started treating me. He took me right away and saved my life.
TBB: On the first episode the other ladies confronted you about your issues with prescription medication. Carla (Facciolo) even went so far as to call you a “junkie”. Was this related to your surgical complications? Can you share your story with us?
RG: I’m not addicted to pain pills, my addiction is Xanax. The pain I was in was so great I was on heavy medication (during the filming of) season 2. I became addicted to Xanax from the depression of not being able to sleep from the pain. It was so tragic just to look at myself. That’s when I went into recovery.
TBB: Rumors have it you took some cameras to rehab. Has your journey been documented for the new season?
RG: I documented the first few days when I got there. I wanted to show the intake experience for people who don’t understand what the recovery process is. Although Carla used a very harsh and horrible term, Dr. Drew (Pinsky) says there are tens of millions of people suffering from prescription pill addiction. It was my decision not for Mobwives, but to help others. You will see the intake process, a personal session with my son (AJ Pagan) and the day I leave. We didn’t shoot straight through, just a couple of days at a time.
TBB: They say you know your true friends by who sticks by you when times are tough. Which of the ladies was there for you most?
RG: Ramona (Rizzo) and Karen (Gravano). Drita (Davanzo) called me, Ang (“Big” Ang Raiola) called me, but Ramona and Karen spoke to me pretty much everyday.

TBB: Were you surprised by who stood by you and who didn’t?

RG: It is exactly what I expected (of the other women).
TBB: Your ex-husband Junior (Hector Jr. Pagan) has been charged with his share of Mob related crimes, and is an alleged FBI informant (who turned your father in). Do you feel that, having grown up the daughter of Anthony Graziano, you were destined to marry somebody like him?
RG: I was never destined to marry a rat, I was destined to marry a man of honor. I have nothing to say about him. It’s not what he did to me, while I understand the level of betrayal for me as a woman, it’s more for what he did to my son and my mother and father. My parents loved him like a son, he was never a son-in-law. They called him their son. (Junior) was in my life since I was 20 years-old, I’m 43 now. He lost his parents and mine filled that role for him. What he did to my son was a fucking disgrace. He jeopardized his son’s life, he knows that in this lifestyle there’s always the chance of that punk in the street who could take revenge out on your family.
TBB: You tweeted out a picture of you and your boyfriend recently. Who is the lucky guy?RG: Oh, he’s gone already. I know that sounds crazy as it was just the other day. I’ve made a decision that right now I’m not in a position to dedicate myself to one person. Since the show started I’ve been doing a lot of press, it’s not fair to another person right now. I’ve decided to date casually as opposed to steady. I do like the sports guys (laughs). The stronger they are. the better. I’m little, I’m only 5’4, my dad was only 5’8, but he seemed like biggest guy in the whole world to me.
TBB: You have a website in development for your greeting card company, Jail Mail. These are not your everyday greeting cards. What is Jail Mail and when will your site launch?RG: Jail Mail has taken a back seat. My business ventures from seasons one and two had to slow down because of my health. I don’t do things half-assed. I have to do things 100%. But the concept of Jail Mail is about giving someone something tangible. Now, so often, people send e cards, but when someone is in prison something they can have and hold in their hands has much more value.
TBB: Thank you for talking with me today. Before we wrap up is there anything else you would like people to know about you now?
RG: I think everybody knows that I’m a loving, yet controversial person, definitely not crazy. As far as being a drama queen, I have the right to be after everything that has happened to me. I’m an empress at this point (laughs). I believe in paying it forward, that if God gives it to you you’ve got to give it back. This is why I am getting involved in whatever I can to help others and their families.