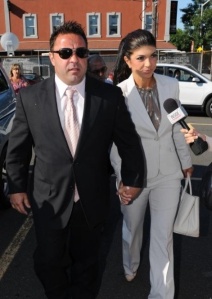 Just when the Giudices were starting to look better on camera, the reality stars’ real life drama has taken a turn for the worse. With 39 counts of financial fraud to be tried in federal court, this is by far the deepest pile of doggy doo any Housewife, possibly reality star in general, has been buried in. Even Survivor’s Season 1 winner Richard Hatch’s failure to report his $1M prize to the IRS wasn’t this serious. In fact, Hatch would have had to spend his entire prize just to post bail for the Giudices who are “free” on a whopping $500,000 each.

The Giudice scandal started long before they were famous. False financial statements and failure to file taxes date back prior to the 2008 premiere of The Real Housewives of New Jersey. I am not here to rehash all the counts against them, however. You can Google endless articles and watch network news for all of that. I’d rather explore why they may have done this, why Teresa’s fans still stand behind her, why maybe some won’t, why the general population should be angry, and some of the shocking details.

Teresa fans have long been a force to reckon with. Her season 1 table flip on Danielle Staub made her an instant star. Was it her passion, her dramatic flare, her physical strength? In the real world I’m not sure flipping a table would be such an honorable act, but with RHONJ fans it was ratings gold. Since that season Teresa was the underdog and even if she was calling somebody a “bitch” she still had a cheering section.

I’ve met Mrs. Giudice on several occasions. Sometimes she’s been distant, but when she is willing to chat she is warm, polite, even adorable. Somebody I’d love to go shopping or to lunch with. She’s an ass buster when it comes to work. I’ve met and followed the careers of many Housewives and, from my observation, the woman does more appearances than any, whether it’s to sell her popular books, her hair products, or her wine (which happens to be one of my favorite drinks…honestly). She also does this all while being a mother. I’ve witnessed her on the phone with one of her daughters who called her during one of our conversations…a meeting in which she also cooed at my two little boys calling them “beautiful.”

There are reasons why she is a hero to RHONJ fans everywhere, however, will she be able to hold that status in light of these new charges? Yesterday Lesley Rousso and I posted our latest RHONJ recap, a job I usually do alone, but needed some framework as I’ve been recovering from major surgery. I always recap the episodes with a humorous, aka snarky tone. I never mean to offend. The recaps are written based on the comedy I see in each episode, not on the true characters of the cast whom I all know and adore in their own individual ways. After the reports that Teresa and Giuseppe (Joe’s given name) were forced to surrender their passports and restricted to travel solely between New Jersey and New York, I ended the article with “and the Giudices will be watching wearing ankle bracelets.” This made some of my readers chuckle, while ruffling the feathers of others.

I was not, as one follower on Twitter suggested, “kicking them while they are down.” I was simply handling an uncomfortable situation with a little humor. I come from a family that traditionally does this. When my maternal grandmother passed we joked how the outfit we bought for her to be buried in was the first new thing she’d worn in 30 years. When my paternal grandfather, stricken with Alzheimer’s, put his underwear in the freezer my other grandmother laughed about it. It may not be how everybody handles life’s tricky situations, but it’s our way, and it’s kept us going through some pretty tough punches. My life, like anybody else’s, hasn’t always been easy, but I’ve always laughed, and believe, like the old proverb says, that it is indeed the best medicine.

But why, regardless of my intentions, get angry with me, or even Kim Granatell who viciously spewed her venom against Teresa and Joe on Twitter last night? Why not any anger at the Giudices? 39 counts of fraud? False earnings claims? False mortgages? Ladies and gents, this is an economy in which hardworking people making honest livings cannot make their bills and get mortgage approvals. There are people who have worked their entire lives and currently have nothing to show for it. People are choosing between groceries and medicines, yet you are heralding someone living in a mansion and driving a Mercedes simply because they allegedly hid their money, dodged their creditors, and refused to pay taxes that you and I paid. Think about the unfairness of that.

The Daily News estimates that Teresa, from the show alone makes $750,000 a season. This doesn’t even include revenue from her many other business ventures. I don’t know about you but for $750,000 I can pay my taxes and still live high on the hog. Perhaps the Giudices are culture victims. They are caught in this whirlwind of having to keep up with the Jonesettis. I hope they learn their lesson. I hope that, for Teresa’s sake and that of her children, if these charges are true they are the fault of a husband who maybe lied to her and took her along for the ride because love is deaf, dumb, blind, and far too forgiving. It happened to Lynne Curtin on The Real Housewives of Orange County and we saw it unfold.

I do not have any ill will towards the Giudices and I believe there is more to the story. I also believe, after all these years there’s a reason Joe has never become a US Citizen. I believe that fair is fair and I put the faith in our courts to figure this out. I also believe that Teresa is a hardworking woman and a good mother and as a fellow working mom my first instincts were to see how she was doing, not just from a mass statement that may have been manufactured by a very crafty PR rep. I contacted a friend of hers directly and asked, “She’s doing well, as well as she can be. She called me today after court,” my source said. Love and light Teresa, God bless your children.