Friday February 15th was the annual Aquarius Boyz Birthday Bash, AKA Ice-T’s (Law and Order SVU, Ice and Coco) star-studded birthday party. The event, a huge success in past years, however, had a few hiccups this go-round.

Originally to be held at Manhattan’s Flat Iron Hotel, the venue was changed last minute due to an overwhelming number of ticketed and invited guests. The party was moved to the Yotel located on 10th Ave. The swanky modern space seemed to have it all, except good lighting, resulting in dark photos and videos for much of the gathered press. 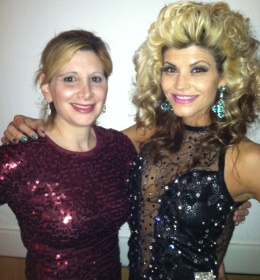 The black tie event had a purple theme. Many of the women in attendance, like Glam Fairy’s Sharie Manon, Briella Calafiore, and Jessica Romano, wore gowns that were or accented with violet. Jerseylicious’s Tracy Dimarco, however, had another color she needed to wear. The buxom beauty “rehearsed” for her August wedding in a white satin mermaid gown adorned with gold jewels. “I’m really excited,” she gushed about her upcoming nuptuals, and disclosed that she plans “to be pregnant next year.”

Back in the VIP lounge we spent some time hanging out with musical act Hi Five who were waiting to perform. Treston Irby of the group told us about their new single Favorite Girl and their tribute video for Sandy Hook Elementary. “We wrote the song before the incident, ” Irby divulged, “but, since the lyrical content was powerful we felt that it could bring some healing to all the families affiliated with the tragedy… The song (You Never Know) is on iTunes. All the proceeds go to the families of Sandy Hook Elementary through the United Way.”

We spotted a few more famous faces that evening including Ramona Rizzo and Karen Gravano of Mobwives, singer Tweet, and actor Stephen Baldwin. However we never saw headliners Ice T, Coco, or Wendy Williams, who we heard from a source all showed up well past midnight. There was a disturbance during the evening when an unidentified man got into an argument with Ice T’s manager Mickey Bentson’s daughter and X Factor’s Lyric 145. Lyric’s rep says that her client was defending her friend when things got physical, and it was after this incident that Ice T, Coco, and Wendy arrived, however another source told us she was there and never saw them.

What do you think? Would Ice T really be a no-show at his own party?