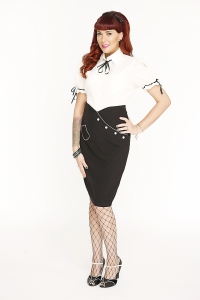 Rachel Federoff is known best as one of  the partners of Millionaire Matchmaker Patti Stanger’s Millionaire’s Club. Together with husband Destin, they are key players in the company. Off camera, however, she’s got her fingers in so many pies. With some movie credits, philanthropical work, and a his and her’s line of T’s and jewelry she’s designed with her hubs, plus a very happy and active little boy to mother, Rachel Federoff just may be the busiest Bravoleb we’ve met!

TBB: Congratulations on the newest season of Millionaire Matchmaker. There are rumors this will be the last. Is that true?

RF: I don’t know. I hope not! I’d like this to go for a million seasons. I didn’t know there were rumors going around that there was a last season.

TBB: Do you have a favorite moment from filming the new season?

RF: I really enjoyed working with Irv Richards (Denise Richards’ dad). I feel that love isn’t just for the young and single.  It’s for any age, type, race, or sexuality.  Getting to find love again for Irv was not only magical but heartwarming to see him move on after losing his wife to cancer. Irv has more chivalry than most men in this world and all men need to look to him as a role model.

TBB: You are the VP of Matching and the Director of Registration for Millionaire’s Club. What’s your typical work day like?

RF: I’m not really Director of Registration anymore. I am VP of matching. It’s a lot of talking to the clients, making sure they are getting taken care of, and a lot of emails and phone calls. Matchmaking isn’t as “cut and dry” easy as it seems. A lot of coaching and counseling goes into it. We give advice on how to act and what to do on a date.

TBB: Patti (Stanger) has a really strong personality. People either love or hate her. What is it like working with her?

RF: I’ve been with (Patti) a long time and we are very much one big family. Do we have our crazy up and down moments? Sure we do. Patti is a big personality but, at the end of the day, she is family with us.

TBB: In addition to Millionaire’s Club you have many side projects like acting, modeling, and fashion. What are some current things you are working on?

RF: I’m currently doing some screenplay writing with (husband) Destin (Pfaff).  I just did a movie (with Destin) called Sushi Girl.  We have our whole clothing and jewelry line called DnR (http://www.dnrbrands.com/)brand.  I also work with a lot of charities.  For instance, I’m the spokesperson for the Choking Game Campaign and a campaign for anti-bullying.

TBB: Tell us about your involvement in educating people about the Choking Game.

RF: There are two women who I call my “super fans”. Their names are Barb and Neecy. Neecy lost her son to the choking game. I got to know them by talking to them on Twitter and they told me about it. Being a mom who also lost a friend in high school to the same thing I could really relate. Kids are choking themselves and getting high and many aren’t coming back. Now even 8-year-olds are doing it. A lot of people are not knowing this is happening so they asked me to be the spokesperson. Anything involving kids I’m all for. I never want to see little ones hurt or die. This is why I also got involved with the anti-bullying campaign as well.

TBB: Like you mentioned, you are a mom which is your biggest job title. You have a 3-year-old son (Sin Halo Pfaff). How do you balance your career with being a mother?

RF: It’s so hard and so difficult. Two months after (Sin Halo) was born we were back filming (Millionaire Matchmaker). It was the hardest thing in the world (to return to work). Most people no longer have the luxury to stay home and raise a child. I love my career and furthering my brand, but at the same time I want to be there for every moment. I know, though, that I couldn’t be a stay-at-home mom. It’s just not for me. At the end of the day we spend so much time with our son and do so much for him. He’s a very loved little boy. Now that he’s in the picture everything I do is for him. (laughs) I sound like a Bryan Adams song.

TBB: You and Destin seem to work together on almost everything, including Millionaire’s Club. How do you keep the romance going when you are working and raising a family together?

RF: It’s definitely hard. The key is to keep things spicy. We always plan date night. When Sin Halo goes to bed we spend time together. We watch movies, play games. The hardest part is when Destin has to play boss to me- I don’t really like that. It’s hard but we’ve been doing it so long so we’ve made it work.

TBB: Who was working with Patti first?

RF: Destin was working with her before me. Season one I came on board. We are two Jewish women with East Coast backgrounds and she asked Destin if he would mind.  At first he wasn’t sure, but obviously we won!

TBB: East Coast? I read you are a born and bred California girl…

RF: I was born and raised in California, but my whole family is from New York! I’m an East Coast girl by blood and by heart. If I could choose where to live I’d be living in New York!

TBB:  You met Destin on Myspace. How has social media changed the way that people date?

RF: Even before I did Myspace I was so tired of meeting losers in bars and clubs so I decided, “I’m going to give online dating a crack.” This was before Match.com even got huge. It’s blown up to where people don’t even go out anymore. I wrote a blog on http://pattistanger.sheknows.com/ about technology and people needing to get back out in the world. I’m all for online dating, even though it sounds corny. (Destin and I) met online and we were friends beforehand. Social networking is such a huge part of life now, so why not use it for relationships? It’s much better than meeting someone at a bar or club that’s possibly had too much to drink.

TBB: With your fingers in so many pies, where do you see yourself in the next 5 years? Will you continue to be (as you describe) a “Jill of all trades” or do you plan to narrow your focus?

RF: I really think that “the sky’s the limit”. I love challenging myself and being creative in a million different ways. If i could be a chef, write a book, or have a tv show, I’d seriously do all of it! I don’t want to limit myself to anything. I want to do it all!

TBB: Thank you for talking with me. Is there anything else you would like people to know?

RF: I think that’s about it. I would like everyone to check out the dnr.com website for the line,which right now is strictly men’s and women’s t-shirts. And we have great jewelry that is real, not costume. Everything on it is a great combination of who Destin and I are.

Tune into Millionaire Matchmaker Tuesdays on Bravo at 7 pm EST