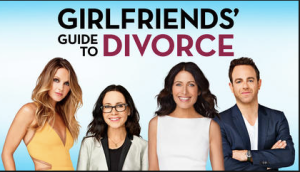 The cast of GG2D restored my faith in Bravo TV!
photo: bravotv.com

I have a confession to make. Reality TV and I have separated, or at least, we were separated. After one too many seasons of forced drama and women tearing down other women, I had just had it. I packed my bags and said goodbye. We were officially on a break. We tried to work things out. Occasionally I would be lured back in with the promise of that old feeling I used to get when I watched The Real Housewives, via a good promo, or an interesting new addition, Lisa Rinna, Eileen Davidson, the anticipation of Bethenny Frankel returning to RHONY, but each time I tried to watch an episode I could only half pay attention. The attraction just wasn’t there like it used to be.

I feared my love affair with Bravo TV was over. How could I still be The Bravo Blonde if I no longer watched Bravo TV? However, those clever Bravo execs found the perfect solution. Whether it be a coincidence, or the reality that reality television may have already piqued, the programming department had the foresight to launch its first scripted series with a cast of characters and actors worthy of prime time on its mothership NBC.Girlfriend’s Guide to Divorce had me from the very first episode. It was witty, fun,edgy, and real, as opposed to reality, television.

Every Tuesday night we conducted our affair. I poured the wine at 10pm and gave my undivided attention to all the drama, comedy, and romance that can only be done right when it is authentically faked! How I’d forgotten the joys of character and story development unfolding at the hands of gifted writers, directors, and professional actors. Watching people who graced my television simply because they loved their craft, and not necessarily the glare of the spotlight.

Between GG2D and American Horror Story (the only scripted show I had watched since Desperate Housewives went off the air in 2012) this was the season I went back in time. Back to a time when the small screen was reserved for those who made their profession solely to entertain. It was enjoyable and stress free. To turn off twitter and just watch, as old school as it is, felt fresh and new.

With both shows over for the season, and thankfully both renewed, I have returned to my regularly scheduled programming. My refreshed eyes have readjusted and have been watching The Real Housewives of Beverly Hills  and The Millionaire Matchmaker again. With the winter ending, hopefully, I plan to be ready to leave my self-imposed hibernation and get back to the circuit meeting the stars of Bravo and beyond.

Yes reality TV, I am watching again. I’m ready to see new seasons of Newlyweds, Real Housewives of New York City, and Real Housewives of Orange County. Or at least I thought I was ready, until I saw the season premier of Shahs of Sunset.

What scripted shows do you like to watch? Do you think reality tv is on the decline? Share your thoughts below!

The 63 year-old father in law to RHONJ mega star Teresa Giudice collapsed, from what appears to have been a heart attack, at the couple’s Towaco, NJ home on Wednesday. The family is “holding it together”  a rep told the magazine and also stated that they were waiting for some family to arrive from Italy for the services.

Joe, who is an Italian citizen, and Teresa still await sentencing for multiple counts of fraud. The original date was set for July but according to In Touch Weekly, has been pushed back to September. A spokesman for the U.S. Attorney’s Office told the magazine that the delay was due to an administrative issue, not the family death as people have been speculating.

New York City Housewife Sonja Morgan has one less vacation property to go commando in. According to TMZ the RHONY star’s St. Tropez villa was sold by a court-appointed trustee for $5.7 million. May sound like a lot of change to you and I, but Sonja was really looking for $8 million, which she says SHE had listed it for, to be financially responsible.

Could Housewives’ producers finally be listening to our pleas? Radar Online says that the crew behind Real Housewives of Beverly Hills is looking to recast and keep it real. After last season’s failure to launch Carlton Gebbia and Joyce Giraud as believable HW friends, the producers are asking the ladies for lists of their best gal pals as possible new members.

Radar Online states that Carlton, along with Kim Richards, are on the outs and Yolanda Foster and Lisa Vanderpump are lobbying for their friend Shiva Safai, fiancee to Foster’s ex-husband Mohammed Hadid, to be the next woman to clutch a diamond on Bravo TV. The network is looking to the success of shows like Shahs of Sunset, in which casts have a real pre-show history with eachother, as inspiration.

Real Housewives of Miami‘s Joanna Krupa is ready to put the past behind her. She told  Access Hollywood that she and husband Romain Zago have no plans to relocate to the 90210, thus squashing rumors she was looking to be one of the BH Housewives. “Housewives was an amazing chapter of my life. It was great because it saved my relationship with my husband…we had an amazing fairy tale wedding, but I think it’s time to move on.”

Have you had enough of Nene Leakes? Well you may be alone, Nene and all 6 of her Real Housewives of Atlanta co stars are set to come back for the franchise’s upcoming seventh season. According to E Online all women are on board for the next installment of the series, which is set to start filming in November. Leakes, who seemed to be done with the show based on her attitude during the season 6 reunion was quoted by the outlet saying, “For me it’s like a blessing and a curse. (The show) has opened up so many doors and opportunities for me. I have been able to do some of everything just from being on this platform.” The self-proclaimed rich bitch wasn’t too shy to point out that being a HW “can put a lot of money in my pocket. Not just the show, I’m saying, other things can come to you.”

Could one of those other things be a talk show? When a twitter fan recently suggested she get one, Nene replied “Keep your eyes open.” A hint of another HW talk show to come? Remember Nene, it’s been done once before,  and we all know how that turned out!

Tell us, do you think Nene should be the next queen of the couch? Comment below, your email will never be sold or shared.

Do you have a tip for the next Reality Roundup? Email brent@tbbreality.com ! Your identity will always remain anonymous!

There’s a lot of whiny bratitude  on reality TV these days. On Monday’s episode of The Real Housewives of Beverly Hills the women were whining and arguing over some pretty petty issues. Brandi Glanville stressing about a paparazzo calling her a “bully” in front of  her kids and Kyle Richards calling a tabloid claim that Mauricio cheated “the worst nightmare of our lives” made me roll my eyes. Sunday’s Atlanta Housewives featured Kenya Moore’s quipping that she can’t live  in anything smaller than five thousand square feet…she’s one person. I’m in a family of four and, well, I don’t even think I have two thousand. Don’t even get me started on the Tankards.

Are we watching these people because their level of materialistic standards are ridiculous to the point that it’s entertaining or do we aspire to be, as Nene Leakes would say, “rich bitch”? It’s an interesting conundrum in this still challenged economic climate.

There’s still such a large divide in this country between the haves and the have- nots. Being middle class is far different now than it was when I was a child. I don’t recall my parents living paycheck to paycheck. We always were able to take vacations. It wasn’t until a divorce occurred that I ever even knew money could be a worry.

These days it’s just not so easy. Middle class families struggle to make ends meet. My generation is the first that will not exceed the financial comfort of our parents…most of us won’t even tie it. Being a product of the eighties and nineties makes being an adult of the now teens a challenging experience. I think a lot of us are asking “Who Moved My Cheese?”

I sometimes wonder if watching these shows is mentally healthy. Bravo TV recently ran a contest to promote the new season of Shahs Of Sunset in which people posted pleas for luxury items they wanted. Some of the contestants spoke of “needing” such items as Chanel purses and Louis Vuitton business card holders. I am not condemning the coveting of luxury items. I have a Chanel purse myself. Do I love it? Yes. Has it enhanced my life? Would I be any less well off without it? No and definitely not.

I’ve often found that getting certain things begets wanting more. It’s really never enough which is why we keep, as a culture, shopping and shopping. What void are we all trying to fill? Amazing that some of these very television personalities we envy as having it all end up embroiled in financial hot water.

I sometimes look at what my parents had amassed by my age and look at what I have. There is a definite disparity. There’s no denying times are tougher, but when I step back and think about what I do have I must admit I’m luckier than most. I think in general if you are reading this article chances are you are too.

Birth is a lot like the lottery. This is a notion I think about often. I, you, we could have been born anywhere into any situation. How lucky to be born in a place with clean water, accessibility of food, electricity. How lucky that we are part of a culture that could even aspire to overindulgence.

I don’t want to preach but I myself will be reflecting over the Thanksgiving holiday about these things. I am often guilty of comparing myself to others, especially on Facebook and feeling that I don’t measure up or aren’t where I should be professionally of financially. I’m learning none of it matters. I’m learning to appreciate what I do have in lieu of lamenting about what I don’t. I’m also really trying to give back whenever I can, no matter how small.

It’s time to trade bratitude to gratitude. It would be nice to see some of this happen on television. Life often imitates art.

What are you grateful for? Share before November 30th 2013 and you could win a Wrapadoo !

*Your email will never be shared or sold and is only used for the purposes of contacting you if you win.